For example, if you applied the "1-Hour Resource Yielding Speed-up, 75%" boost, Troops that were in resource locations before the boost was activated would continue yielding resources at the same speed. But for the troops that start yielding after the item has been activated, the process will speed up by 75%. 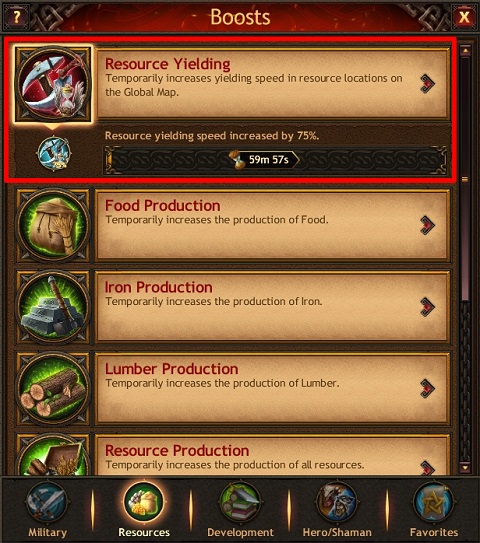 Let's suppose you are preparing to attack another Jarl's Town and activate the "10-Minute Increased Offense, 45%" boost. During the next 10 minutes, your attack will be more powerful, but when this time elapses, the offense stat will return to its previous level. Remember: the boost must be activated before the battle starts. 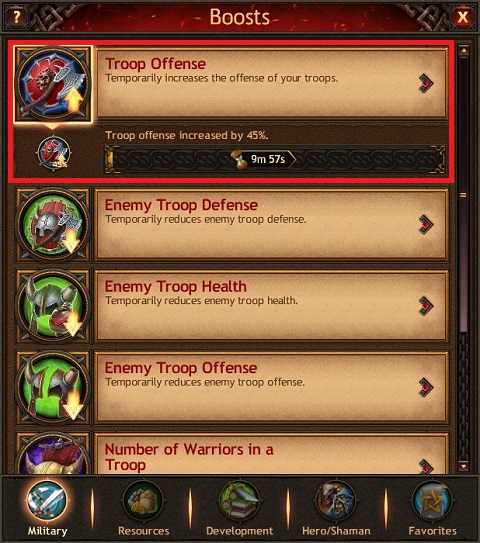 Another example: you are preparing for an Onslaught and you want to temporarily increase the maximum number of warriors in a troop. To do this, you need to activate the Troop Enlargement boost. Please note: the boost will be active until the troop returns to the Town. 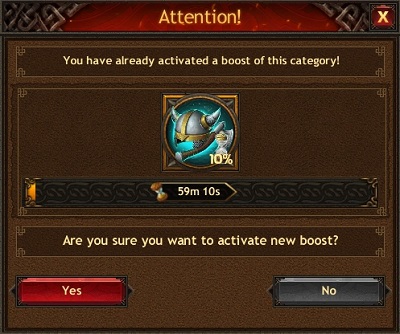 Some boosts need to be activated before sending troops (for example, Troop Enlargement, Warrior Number in Onslaught, etc.). They will be active until your troops return to the Town.

Please note: the number of warriors in an Onslaught is about how many warriors can set off from the initiating Jarl's Town. Therefore, it is the Onslaught initiator who needs to upgrade this stat and apply the Warrior Number in Onslaught boost. The bonuses of participating Jarls do not influence the number of warriors in the Onslaught, that's why they need to increase the warrior number in their troop (by upgrading the Shrine of Odin and learning Knowledge) and apply the Troop Enlargement boost.

You can purchase boosts:

It is also possible to get them as a reward for:

Please note: the King of Jotunheim — the winner of the legendary Battle for the Throne Competition — can grant any Jarl special coffers containing boosts.

In the next subsections, the functions of the main boosts will be described.