Every Invader appears in the Kingdom for a certain amount of time, let's say, for a week. After it is destroyed, a special Invader's Lair resource location is left behind. You can capture it, recapture it from an enemy, or repel enemy attacks on it. After a location is exhausted, it will vanish. A new Invader will replace it, but not on the same spot. It will be the same Invader as the first one if the initial period (in this case, a week) has not elapsed yet. 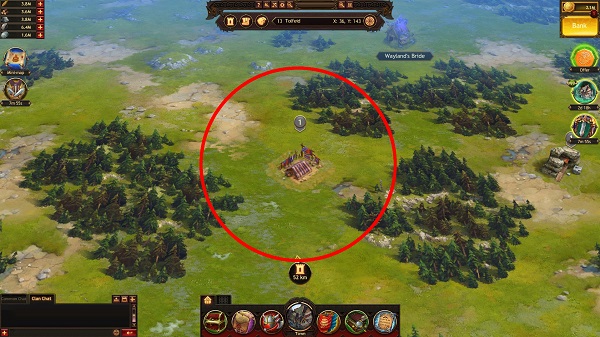 Only Heroes can attack Invaders. To do this, they need enough energy. The stronger the Invader, the more energy it will take to attack. The basic amount of Hero's energy is 1,000 units and the maximum possible amount is 500,000 units.

To increase your Hero's energy, use the Hero's Energy item. You can purchase it in the Item Store for Gold or as part of Bank offers. You may also receive this item as a reward. Open the Chest of Loki and capture resource locations more often: when your troops exhaust a location, you can get Hero's Energy as a trophy.

Please note that the Hero's Energy item has a temporary effect. Let's say you increase your Hero's energy from 1,000 to 100,000 units before starting an attack. The Hero destroys some Invaders and uses up all the available energy. Over time, the Hero's energy will return to its initial value — 1,000 units.

You can increase the energy amount and its restoration speed using Knowledge, Hero's Skills, Town Skins, boosts, equipment, gems, and bonuses in the Events window.

The number of all the Hero's Energy items you have is displayed in the My Items tab, Military section. 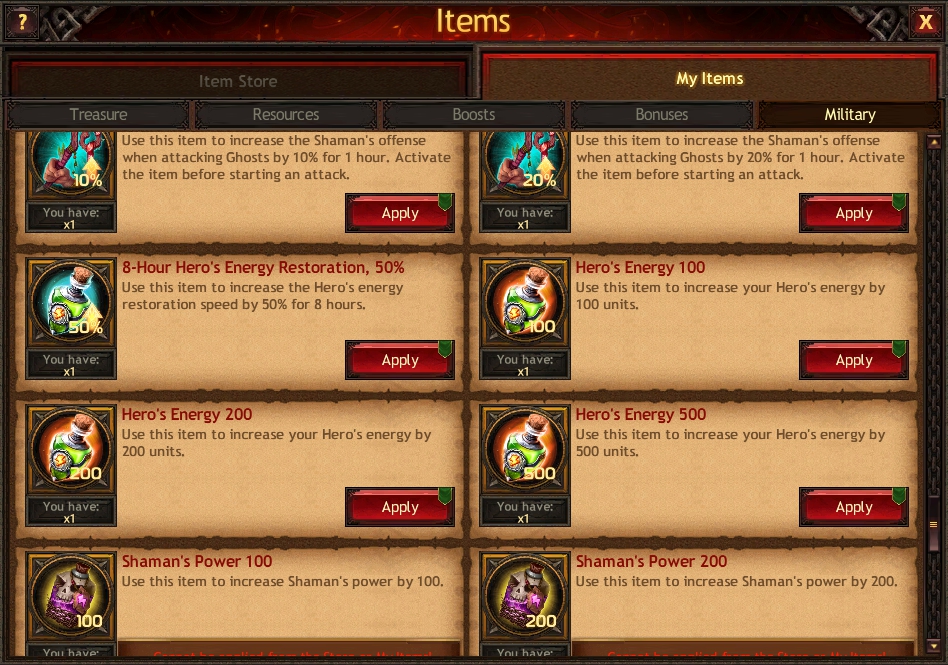 Sustained Attack is attached to one Invader at a time. For example, if there have already been four attacks on a level 6 Man-eater within an hour, and the bonus is at 60%, attacking another Invader will reset the counter to zero, and the Sustained Attack will start over.

Please note: Hero and Hero's Double can attack the same Invader in turn, but if you attack different opponents, the bonus to offense will not increase.

During a normal attack or an enhanced attack, an increased offense multiplier can be randomly activated (producing a critical hit). As a result, the Hero will spend the same amount of energy but deal a more powerful hit to the opponent. 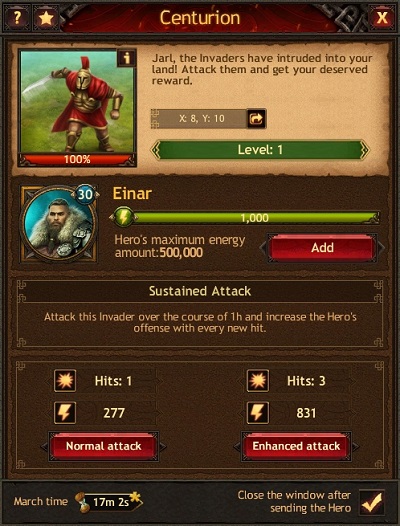 There are four ways to increase the Hero's offense:

You can affect these by using Knowledge, Hero's Skills, equipment, and boosts.

By attacking Invaders, you can obtain resources, gems, or materials, which you can use to craft special equipment. You also have a chance to get one of the Invader's materials when yielding resources in its Lair. Every Invader has its own materials. To know more about them, open the detailed information about an Invader by selecting it on the Global Map.

Please note: you can also get parts for the Barbarian's and Centurion's equipment from Coffers of Materials in the Clan Store or by yielding resources in Gifts of the Gods locations.

Sets of Invaders' equipment give various bonuses that improve the stats of your troops, Town, and Hero. You can learn more about equipment in the corresponding "How to play" section. 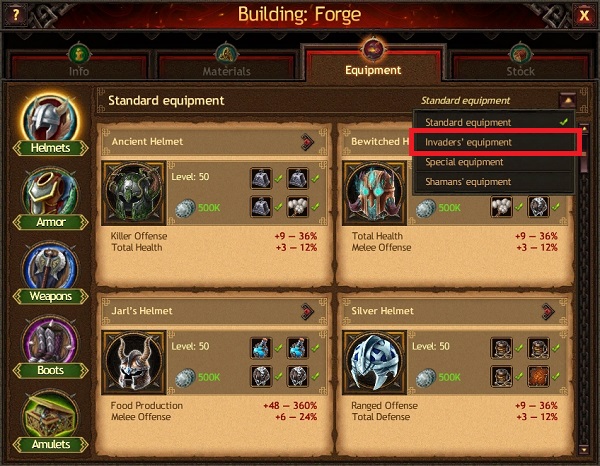