In global Competitions, Jarls from one Kingdom compete with Jarls from another Kingdom. Battles can take place on the territory of all opponent Kingdoms. 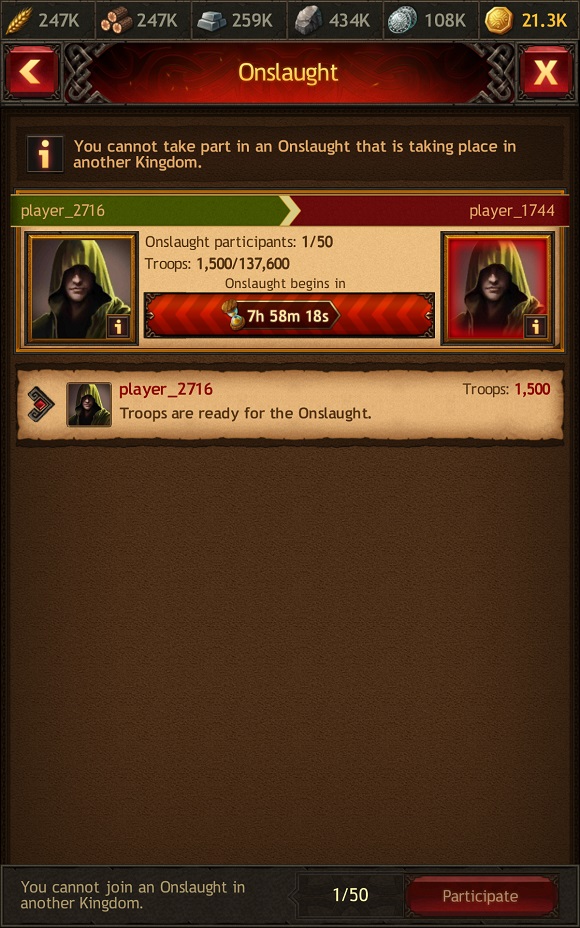 * In the Clans Battle, this requirement doesn't apply. If the Jarl permanently moved to another Kingdom after this Competition was announced and joined a Clan, then this Jarl won't bring points to the new Clan, but the enemy Clan will get points for attacking this Jarl.

During the Clans Battle, the following color markers are used:

During global Competitions, you will have access to the Homeland and Foreign Land Chats, where Jarls from your home Kingdom and enemy Kingdoms will have special color markers.

The Homeland Chat is used for communication between Jarls from the same Kingdom. The Foreign Land Chat replaces the Common Chat when you're in an enemy Kingdom.

The Chiefs Chat is available for all Clan Chiefs from the same Kingdom. Here, leaders of alliances can discuss general tactics and strategies to win in the Competition.

This means that Jarls who are in their home Kingdom can write in:

Jarls who relocated to an enemy Kingdom can write in:

Color markers for Jarls in Chats

Points for personal achievements can decrease during a Competition and even go into negative figures if a Jarl demolishes buildings (in Competitions where there are tasks to increase Influence by constructing and upgrading buildings).

The number of rewards for passed checkpoints is determined based on the number of points earned for personal achievements by the time the Competition ends.

For example, suppose that a Jarl has earned a certain number of points and reached checkpoint 3. Then the Jarl demolishes buildings and their points for personal achievements are between checkpoints 2 and 3. In this case, when the Competition ends (if the Jarl's Kingdom won), the Jarl will receive rewards only for checkpoints 1 and 2. Jarls who have a negative number of points won't receive any reward for personal achievements.

Clan points can decrease during a Competition and even go into negative figures if clansmen demolish buildings.

For example, suppose that a Clan has reached a certain checkpoint and received a reward for doing so. After some time, the Clan points decrease as some clansmen demolish buildings in their Towns. The Clan members have to work hard to earn the required number of points and reach the same checkpoint for a second time. But the Clan won't receive a reward for this achievement again.